Brand Becoming a Mainstay in Local Pubs and Restaurants, May Soon Go Provincial 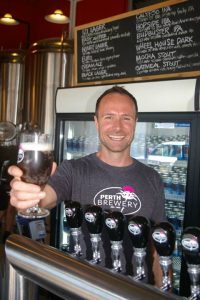 Perth Brewery, a mainstay business in town since 1993, is quickly becoming one of the most recognizable brands in the area and according to co-owner Jeremy Steeves the company is just getting started.

In the beginning, PB focused on offering customers the ‘brew your own’ experience. And while they still offer that service and have even expanded it to include bottle-your-own wine, the newest innovations have come in the area of retail sales.

“The craft-brewing industry has really taken off in the last few years, especially in the area of retail sales in restaurants and pubs and that is the shift we are working toward here,” Steeves said.

PB continues to pursue more and more opportunities to get its beer into restaurants and pubs but is also looking to expand into LCBO and Beer Store outlets in the province.

And Steeves says if that happens, the company may very well need to grow to meet the demand.
Perth Brewery co-owner Jeremy Steeves

“There is a real shift happening in our business and it is on the micro-brewery side where the growth is,” Steeves said. “That growth is supporting our expansion plans and we want to see what kind of impact we can make in the retail industry.”

But that doesn’t mean PB will abandon the package-your-own side of the business, according to Steeves.

“We have a lot of local folks who really like the package-your-own option so it will certainly be a part of our business going forward.”

The future certainly appears bright for the energetic Steeves and PB beer which as well as being featured in a large number of bars and restaurants in Eastern Ontario is also regularly the beer most people see being served at special events in and around Perth.

“We were at the Rock the Docks event a few weeks ago in Rideau Ferry, we were at the Perth Kilt Run, the Stewart Park Festival and we’ll be at this summer’s Ribfest,” Steeves said, adding that the company is more than happy to get out there and support the community that supports them.

“We have mobile draft equipment and can go almost anywhere and we’re happy to do it,” Steeves said. “But we also want to make sure residents and tourists in the area come by for a visit and bring their families and friends, have a tasting, tour the operation and get to know us. We want to make sure that as many people as possible taste our beer, tour the brewery and have a good time doing it.”

For those who do come by for a visit and a tasting, they will very likely join an ever-growing list of fans of PB beer. In fact, at last September’s National Capital Craft Beer Festival in Ottawa PB beers received the People’s Choice Award every day during the three-day event.

“We were particularly proud of that,” Steeves said. “We are really happy people are enjoying our beers and that our hard work is paying off.”

In the end, for this writer it is not very often that you have the chance to meet people who truly have the best jobs in the world but we think we have found just such a group at Perth Brewery where the entire building is full of happy, smiling people.

Congratulations to Perth Brewery and here’s to continued success, growth, brand recognition and the winning of new generations of fans!

What have you been up to?